Believe in the Lord your God and you will be upheld.

Little did we realise how relevant this verse would come to be for us as a church.

In January, the whole of Monmouth was rocked by the death of Samuel, a seven year-old boy who was killed on his way home from school in an accident. Samuel, his parents and two brothers are all part of Monmouth Baptist Church. It was a tragedy, but we saw the Lord work through his people in some wonderful ways. Believing in him, we were truly upheld.

So much good resulted from Samuel’s death and much of it was due to the eagerness of his parents to share their hope in Jesus through Samuel’s life and evident faith. The response of the church came from the robust and sustaining grace of God at work through them and from their deep reliance on Jesus. People attended seeker groups, hundreds of adults and children came to a community memorial where the gospel was clearly shared, New Testaments and devotional books were given out, some came to put their faith in Christ, and a lasting legacy of hope is still being passed on.

As a fellowship, we tried to support Samuel’s family in their grief. We sought to help our shocked community look to God in constructive ways and we also brought our own sadness and sense of loss to him.

Here is a short account of some of the responses that took place.

As a family of believers, the church helped Samuel’s family with practical help and prayerful support. On the Sunday following the tragedy, we faced what had happened together, head-on and brought it before God in the focus of our worship. We had a packed church: our regular congregation, many people from the community looking for solace, and Samuel’s family. The act of worship enabled each one present to hear the gospel applied to their need, and to look to the grace and goodness of God. Our prayers affirmed gospel truth, simple things like when to stand and sit were explained, and we interceded for the town, the school and the driver in the accident, as well as Samuel’s family and classmates.

Beyond this, the fellowship offered ongoing prayer, help and encouragement. We held the funeral service and helped co-ordinate a large community memorial service, held in the local comprehensive school, which was designed to be especially suitable for Samuel’s classmates and included contributions from family, school and the church.

We also supported Samuel’s family in their burden to initiate prayer for people who were being touched by what had happened, praying for revival, and people met in a series of informal prayer meetings for this purpose.

Central to our ministry was offering helpful ways for the community to express condolence, and pointing them to Jesus and the hope he offers. This primarily involved a welcome to our Sunday services, directing them to the book of condolence and a just-giving page set up by friends from the fellowship. The book of condolence was available at publicised times in the school foyer and the church building, with someone discreetly near for people to talk to if needed. We liaised with Samuel’s school to offer support to staff, upset parents and children. We also responded to the media and supported the family in public announcements. 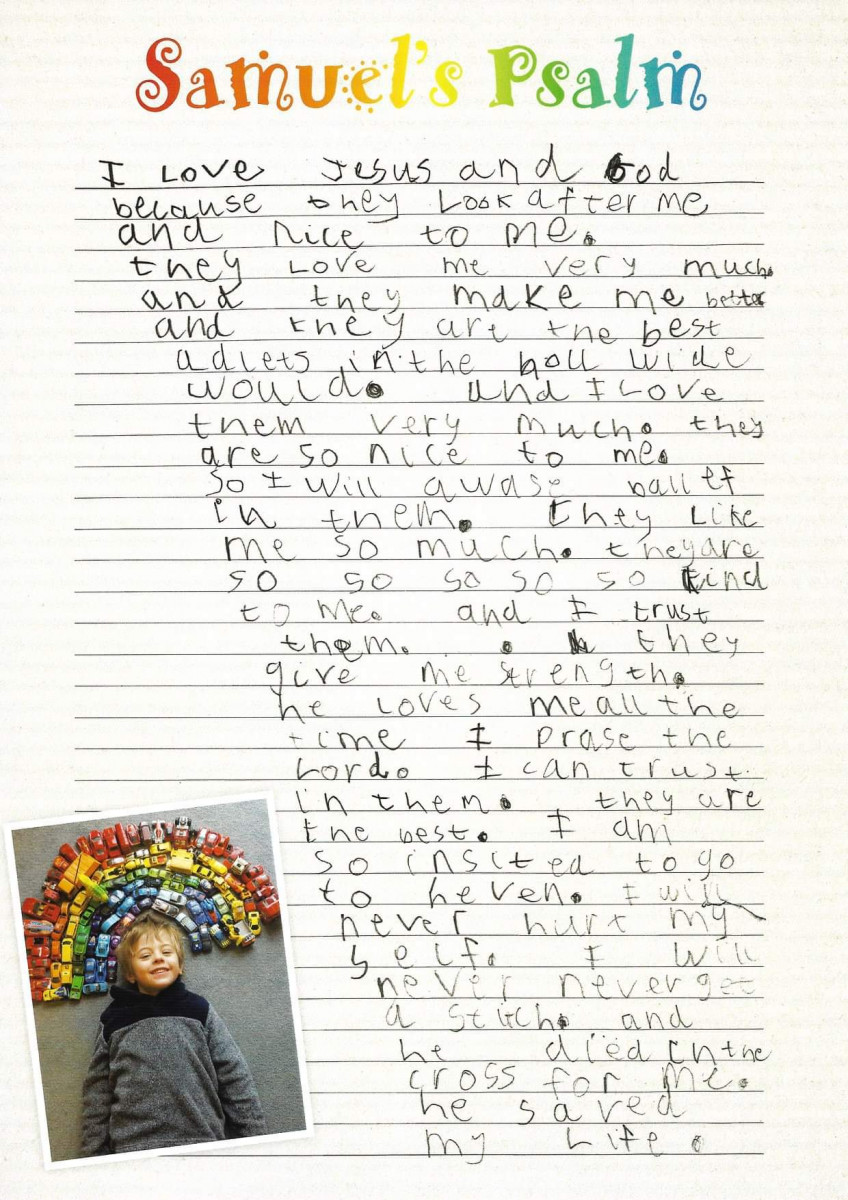 We quickly ordered booklets, Comfort in Sorrow, so we had something suitable to give people. Samuel’s family had arranged for a poem he’d written about his love for Jesus and his hope of heaven, to be printed with a message from the family. This became known as Samuel’s Psalm and was widely distributed.

It was the faith of Samuel’s family that shone through with such hope in their very real sadness which ultimately helped at the school gate, and in the wider community, and many spoke with admiration of the faith they had. The door had been opened for people to think about life and death and the things of God, and we saw the need to help them grasp that faith was not something you either had or didn’t have, they could have this faith too. So, on the following Sundays, we took the theme of ‘Getting Connected’ and helped visitors to discover how they could connect with the Lord. In addition, a seeker group was advertised and set up to help those who were especially moved to explore the Christian faith, led by a local school chaplain, who also belonged to our church.

It was apparent that some foundations had been laid in the fellowship which helped us face this sad tragedy with hope, faith and practical love.

Firstly, at least once a year we purposefully explore the question of suffering. Whether through a guest service, a visiting speaker, or through Bible studies, we explore the subject of suffering biblically. In many ways, this had helped equip us with the ability to trust God when theory turned into reality. Instead of anxious questioning, we experienced his nearness, and took strength from him to help each other and our community through our real sense of sadness.

Secondly, our well established small groups meant there was a good network of caring, supportive and praying friendships already in place, who all mobilised quickly to help each other and Samuel’s family.

Thirdly, we had already built good relationships with local schools through the regular ministry of assemblies and other clubs and contacts. This enabled us to be available, helpful and supportive as people who were already known.

People do not think about death or spiritual things much, but Samuel’s death highlighted a truth that his family and the church were able to share. The truth is that death is not OK. It is an intrusion into God’s good world and it rightly grieves us, but Jesus can handle death, even the death of a child. In that first Sunday gathering, we explored this in the miracle of Jairus’ daughter (Mark 5:21-43). We noticed three groups in it: a bereaved family, the friends of Jesus, and a grieving community. Jesus had something to say to each group.

To the family, he invited them to trust him: ‘Do not be afraid. Just believe.’ We saw what it looked like for this family to do just that. To the friends of Jesus, he simply tells them to stay close to him. By doing that, they saw his power at work in the family and his challenge to a mourning community. Finally, to those weeping mourners, he gave a challenge to change their mind about death when it’s in the hands of Jesus: ‘She is not dead, she is only sleeping.’ Death looks different when Jesus is around. In this case, he wakes her up, her spirit returns and he brings her to life again, but the real power of the miracle is this: it shows what happens to all who place their death, as well as their life, in the hands of Jesus. Samuel fell asleep, and woke up looking into the face of Jesus.

It is in believing this that we truly were upheld.

Jonathan Greaves is the pastor at Monmouth Baptist Church.