The priest came running towards us, verbally opposing us and shouting, ‘These are my children!’ I was leading a children’s 5 Day Club in the city of Palencia, Spain and this was typical of the opposition we faced back in the early 1990s by the Catholic church. At that time, 98% of the Spanish population claimed to be Catholic. A recent survey by the Centre of Sociological Investigation (CIS) in Spain revealed that 29% of the population claim to have no religious beliefs and in Madrid, only 20% claim to be Catholic. This dramatic shift is not only evident in Spain but also in other countries and so creates the challenge of how to reach people who are Catholic and those whose faith background was Catholic.

How can we reach Catholics?

Have a genuine interest in people, in your neighbours, colleagues and people you meet. Get to know them and then conversations can develop into deeper areas regarding faith and beliefs. The advantage of talking with Catholics is that, although they may not know much about what the Catholic church believes or be able to converse in detail about it, they do at least have some knowledge of who God is, who Jesus is and an idea about sin. These basics give a great foundation to start from.

A good place to start with is your testimony of salvation. Showing your faith as a ‘relationship’ with God as distinct from just the acceptance of a ‘religion’ is a powerful message to a Catholic. The daily, personal aspect of our relationship with God and his Word can make an impact.

Studying the Bible together

When you sense that there is interest or a point of connection you could invite them to a programme that investigates Christianity and get them to study the Bible. I found it so exciting to see women amazed at how real the Bible characters were when we studied them together. I have found that solid decisions to accept the Lord arise when people study God’s Word. The impact of studying the Word of God can lead them to accept the Lord Jesus and give their lives to him.

The surety of eternal life

We can share the hope and assurance the Bible gives us as believers regarding eternal life. Catholics have no assurance of salvation. I rented an apartment from a Catholic priest when I lived in Spain and I was able to ask him about his salvation and if he knew for sure he would go to heaven when he died. He replied that it was a sin for him to say that. The Catholic church offers no assurance of salvation and therefore no hope when people face death and eternity. We can share how the Bible assures us we can know we have eternal life.

Apart from personal contacts, organised events can break barriers and create an opportunity to share the gospel. In Spain, I found children’s work led to openings into families and gave the opportunity to invite them to special events where we could share the gospel, especially when their children were taking part. Christmas is a good time for this.

Recently at my church in Belfast, a special outreach was held and I invited my Catholic friend to a special event. I wasn’t sure if she would attend, but she did and she also invited her sister. Both ladies loved the programme and the testimony of the lady who shared and were deeply impacted by the whole event. They sensed something ‘real’ during the evening that was a new experience for them.

A reality today is that many Catholics have become discouraged by the Catholic church and all the scandals of abuse that have been revealed. Although they distance themselves from the Catholic church they are not interested in moving towards any other faith. We need to be creative in thinking of ways to make contact and create opportunities to share the gospel with them. A Catholic priest was once teaching about the different faiths and asked if he could bring his class to the evangelical church in Palencia so we could teach the students what we believed. That was an amazing opportunity to teach people the truths of the Bible.

As we seek to share with Catholics and those who have become disillusioned with the Catholic church, we must pray! Paul writes in 2 Corinthians 4:4:

The god of this age has blinded the minds of unbelievers, so that they cannot see the light of the gospel that displays the glory of Christ, who is the image of God.

This is so true of Catholicism. We need to pray that God would ‘open their minds’ so they can ‘see the light of the gospel’ when we share with them, and that the gospel will bring them to faith.

What do Catholics believe?

It is good to familiarise ourselves with the beliefs of the Catholic church and one way I find helpful is considering the differences between what we as Evangelicals believe and what the Catholic church believes. Be aware though that not all Catholics may be aware of all of these aspects of their faith. 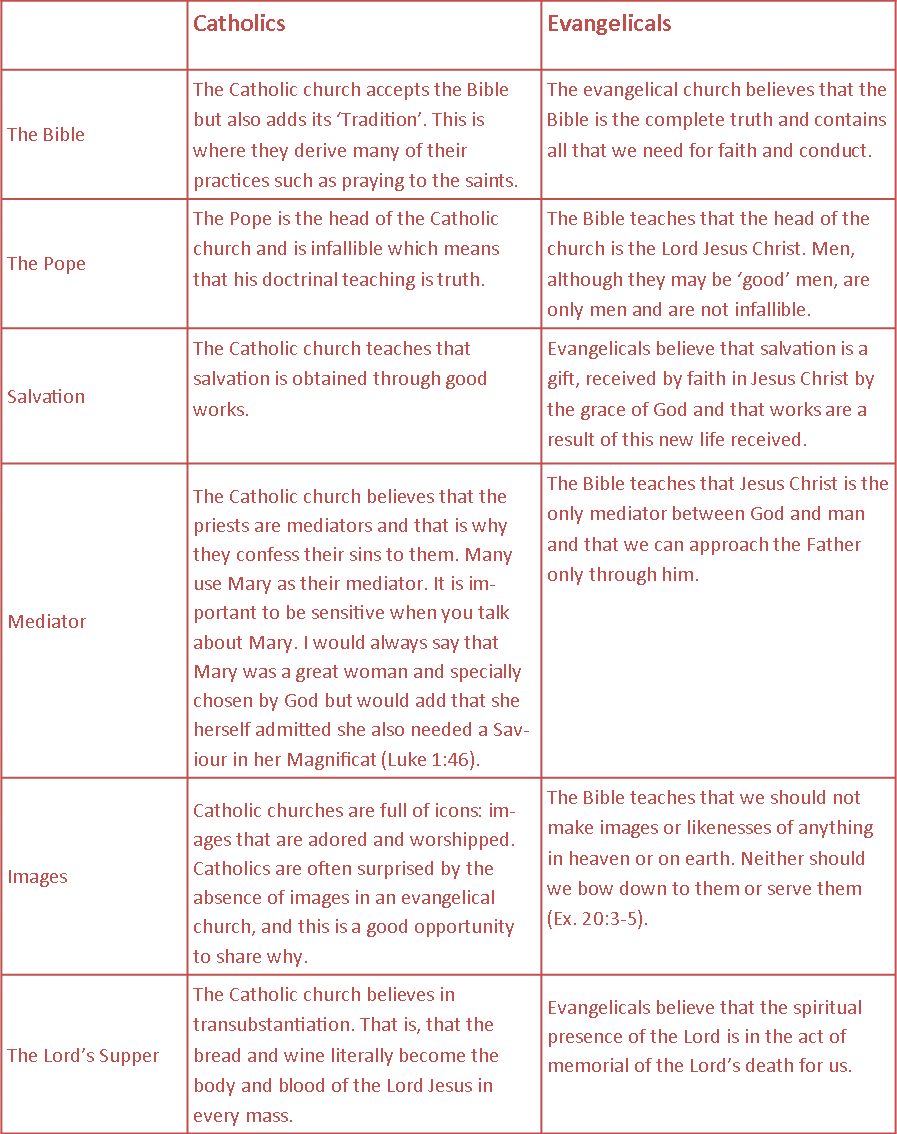 Next in this series: Sharing Jesus with Mormon Missionaries »

Laura Sanlon is a missionary with UFM Worldwide and served in Spain for 27 years before moving in 2018 to serve with Nairobi Chapel in Kenya to train Kenyans for cross-cultural mission.